Here is my speech to the worlds mma press for UFC 38 the 1st time the UFC came to the UK. 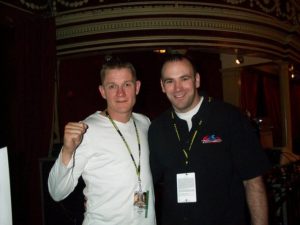 “Welcome I should like to introduce myself to you all, my name is Mark Woodard and I am the general manager of the British association of mixed martial arts affectionately known as BAMMA.

Mixed martial arts have been popular in the UK for about 5 years now; its popularity began with the American event known as the ultimate fighting championship as time went on newer events emerged in America and Japan.

Martial artists and promoters in the UK soon took notice of what was happening around the world with this new martial arts revolution and formed a solid foundation in the UK on which the sport could develop.

One of the main pioneers of MMA in the UK was Mr Lee Hasdell, himself a professional fighter in Japan for several years. During the late 1990s he promoted several large MMA shows that changed the face of martial arts in the UK forever. Since that time MMA in the UK has gained a vast following As promotions such as ULTIMATE COMBAT have proven, by slick promotion and a sell out crowd of enthusiasts who had travelled from all over the country to support this great sport.

UK fighters have been steadily improving with the development of the sport and we have already produced some truly homegrown talent. And indeed today we are in the presence of three of the best of British professional martial arts athletes, Ian Freeman-Mark Weir and Lee Remedios.All of whom have proven that they are world class professional athletes.

These three athletes are competing on the upcoming ULTIMATE FIGHTING CHAMPS UK at the ROYAL ALBERT HALL on July the 13th.

The amount of training required to become a professional MMA athlete is imense, fighters have to be able to box as well as a boxer, kick as well as a kickboxer and grapple as well as a wrestler and be strong, flexible and aerobically fit as the duration of the bouts will be 3x 5 minutes for non title fights and 5×5 minute rounds for title bouts.

In the UK BAMMA has introduced a three tiered structure for mixed martial artists, the 3 levels of competition run by BAMMA are, amateur, semi professional and professional, the UFC will be sanctioned under the BAMMA professional set of rules.

We feel that MMA is on the the brink of gaining the levels of popularity in the UK that is has enjoyed in countries all over the world, we at BAMMA are happy to be working with the UFC to better the sport in Britain and to be sanctioning their first ever event on UK soil

You can find out more about which cookies we are using or switch them off in settings.

This website uses cookies so that we can provide you with the best user experience possible. Cookie information is stored in your browser and performs functions such as recognising you when you return to our website and helping our team to understand which sections of the website you find most interesting and useful.

Strictly Necessary Cookie should be enabled at all times so that we can save your preferences for cookie settings.

If you disable this cookie, we will not be able to save your preferences. This means that every time you visit this website you will need to enable or disable cookies again.

This website uses Google Analytics to collect anonymous information such as the number of visitors to the site, and the most popular pages.